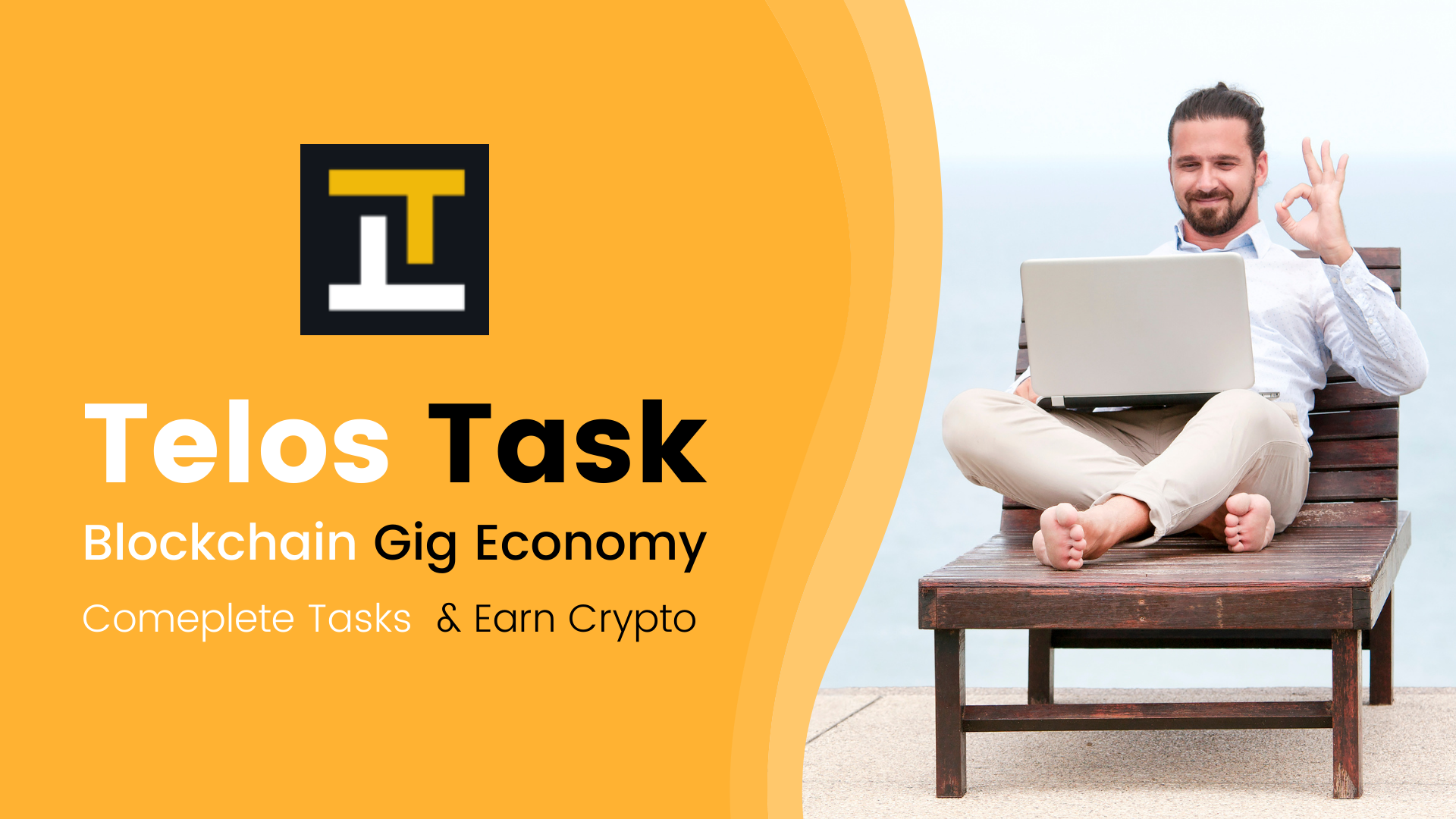 Telos is a web 3.0, blockchain platform for building fast, scalable distributed applications with feeless transactions. The idea & philosophy is quite similar to Hive since both of them are DPoS (Delegated Proof of Stake) Blockchains.

Do you remember them joining Hive/Leo Finance and making their first post a few days ago? After the warm welcome by our community, they have started making a series of posts to explain more about the blockchain, token, and the development going on in their ecosystem.

Their intentions are pretty clear from the above statement they made under the first post. It's great to see the fastest blockchain (Telos) in the world using the most active social media blockchain (Hive) to publish their content. I have recently followed them on Twitter to get the latest updates & more info about the ongoing projects on the network and found something I have been looking for quite some time now.

Telos Task is a peer-to-peer freelance marketplace that rewards users & freelancers in Crypto, for doing Micro & Marco Tasks. Anyone can join the platform and perform a variety of tasks available for both skilled and unskilled users. For example, Micro tasks do not require any particular skill and they will be fairly easy & quick to do. Whereas macro tasks require specialized skills only and hence higher rewards. This means there is an opportunity for every user.

You can simply go to https://telostask.app/, create an account start doing tasks to earn $TASK tokens. Once you sign up and log in, you will be able to see a list of Micro & Macro Tasks which can be done by all registered users. Just choose any one of them and follow the instructions. 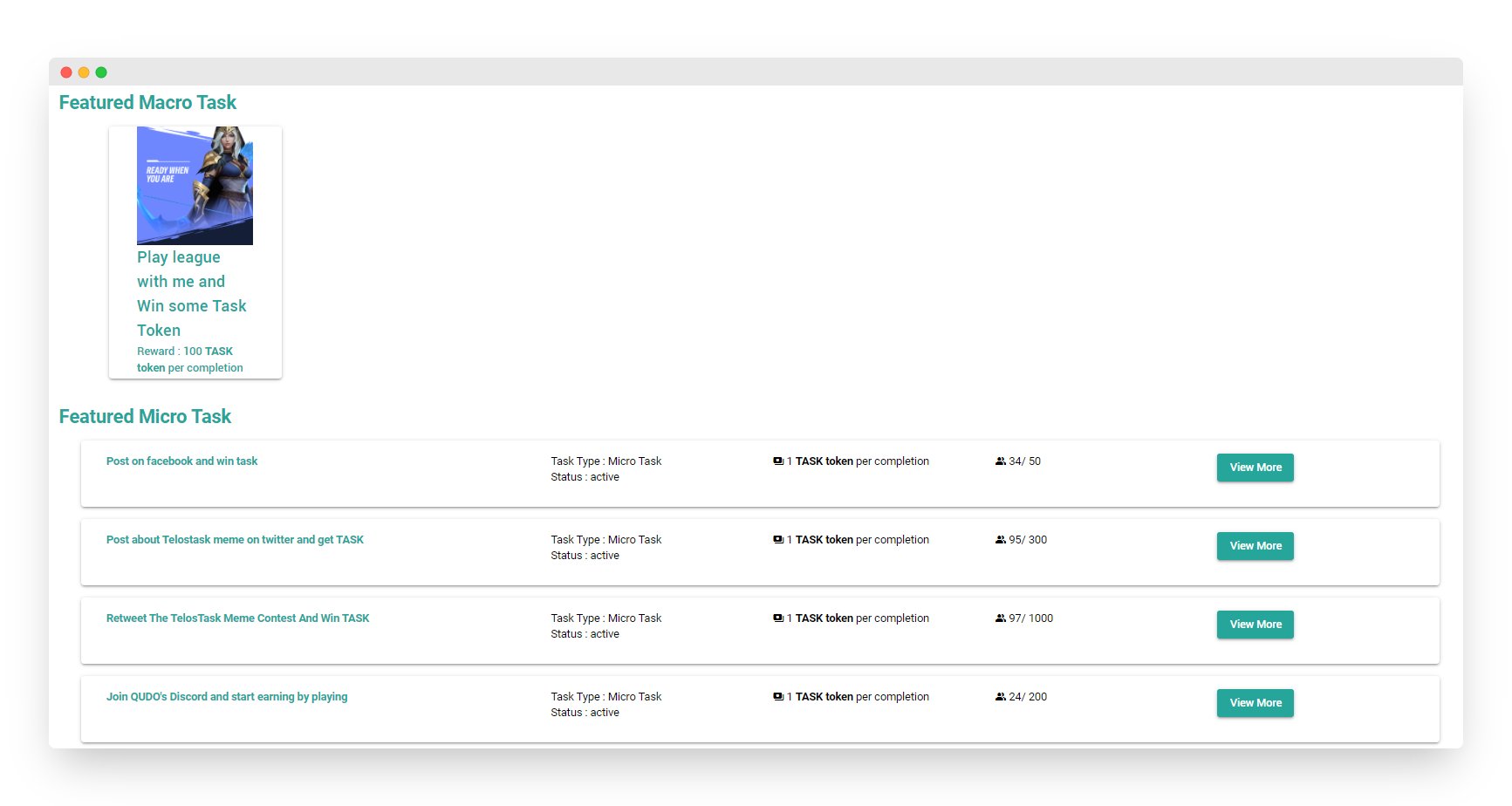 Each task will show the category, budget, and estimated time to finish. So users/freelancers can comfortably choose which task suits them the best and choose to complete it. Once you accept and start, you will be required to provide proof of task completion. Once you submit the proof, the task owner will accept the submission and your tokens will be credited to the associated wallet. The platform uses an escrow system to automate & secure payments of Tokens over Telos Network.

Right now the website is quite basic and very few tasks are available but it's worth trying because most of them are pretty easy to do. Hopefully, as the platform grows, we will see more Task Givers & Freelancers so that we have enough opportunities for everyone.

We are currently dealing with a global pandemic and the job crisis is on the rise. This pushed many people into the Freelance market. The benefit of such a market is that you can do the job from the comfort of your home and it pays really well.

It's a win-win for both the parties involved because task owners can now outsource their work at affordable prices and it provides a revenue stream for skilled or unskilled freelancers. According to a Mastercard study done in 2019, the global gig economy was predicted to reach $400+ billion by 2023. That's huge! By 2027 more than 50% of US workers will take part in this in some or another way.

“This is the real power of high-capacity blockchain. Now anyone can instantly create a free Telos account with an easy-to-remember name and log into it with no more hassle than logging into Twitter. It’s a mass adoption-ready platform that’s desperately needed right now as people try to figure out reliable new ways to earn income and perform business tasks in the post-COVID world.”
Destiny Marshall, Team Lead - TelosTask
Source: Telos launches new gig economy platform

Blockchain technology can solve many underlying problems of the current freelancing market by providing the following:

I would love to witness such platforms revolutionizing the gig market in the next few years and providing a sustainable platform for both gig creators and freelancers. Hive is just perfect to serve the gig economy for the very same reason Telos is. It's Fast, Scalable & Powerful. ;)

Just to let you know guys, @thelogicialdude is planning to launch such a marketplace under the @hivehustlers community in the near future. It would be interesting to see something like this built & grow on Hive, potentially adding to the eCommerce within the ecosystem.

If you have liked my post, please make sure to upvote and reblog to support me. See you in the next one!

No financial advice. For infotainment purposes only.

It's a nice little place to go to. Are the tasks put out by them tend to be promotional stuff? Is it going to be like an actual gig or is it just going to be a place like Cointiply where you do simple tasks. I think more complex tasks will prove to be tough since it would include vetting the person and guidelines as what would be considered acceptable or not.

Are the tasks put out by them tend to be promotional stuff?

The platform is new. The tasks right now available are mostly micro (simple tasks) in nature. You don't need any skills to do them. As their product grows in terms of functionality and users, we might see better set of tasks or projects suited for all kinds of freelancers out there.

You are right. I still do not understand how they make sure that the task guidelines have been met. Without human intervention, it's just impossible. I hope these things develop soon so that gig economy could flourish on Blockchain. It's a cool use case and Hive must have something like this.

We have been trying to build a gig offering on the classifieds, but it’s hard to get people to post properly, on that note, use the ‘gigs’ tag for this post to get indexed in the right place. We are also building a gig site similar to Fiverr on the HiveHustlers.com site, hoping to have it ready by the first of June. I am interested to see what they can do on telos.

but it’s hard to get people to post properly

I agree. We need to create a platform where there are proper placeholders for each thing that goes in a perfect Listing.

We are also building a gig site similar to Fiverr on the HiveHustlers.com site, hoping to have it ready by the first of June.

Thanks for letting me @hivelist. I am really looking forward to it! It's going be so amazing that Hive will have their own Gig Platform.

We are also building a gig site similar to Fiverr on the HiveHustlers.com site, hoping to have it ready by the first of June.

Their platform needs improvement on a big scale. It's very basic right now and what they have promised in the whitepaper, we are far from that. I hope they succeed in what they do.

I would like to see some kind of 'Interoperability' between ours and theirs. We can collaborate rather than competing. Anyway, All the best you guys. Cheers!

Not sure what you mean by what we promised in the white paper... We have done everything we set out to do so far... We control HiveHustlers at this point...And we have hit everything on our roadmap and then some...

I am sorry for the confusion. I was talking about Telos Task platform in the last section of my comment. Not Hivelist.

This is great news so I am saving your post for a little bit later
p.s Thanks for following, I followed back ;)
besides, I loved your content since the day I read it

Thank you so much Katerina. It means a lot to me. Glad that you like my content. :))

And hopefully we get a gig platform on Hive as well. It's going be great.

Awesome! I'm quite busy with some crypto faucets but this looks way different so I will give it a try!

That's perfect bro. Please share your favorite crypto faucets if you can. Would love to join some of them. You never know if one of these coins moons that you get for free. 😁

And do checkout Telos Task. It seems pretty interesting!

My favorite so far is Faucet Crypto (referral link)!
I love it because it has a very clean UI, it is very transparent, and it rewards a good amount! However it does not have its own token. You can withdraw in dozens of crypto, and the minimum is easily reached (except for DOGE for technical reasons), so I use it to have a taste of coins I have not tried yet.

I also like that it is gamified, and that it is based on a level up system to enhance your multiplier.

Give it a try and let me know what you think! Ads can be annoying so I would recommend using it on Brave Browser.

I did try Telos Task and I like the idea a lot! The only issue I have right now is I can’t access the dashboard.

This is something that I trying to lately.

Delegate 80 percent of tasks and focus on the real 20% yourself.

That way, you will be able to achieve what you are looking for.